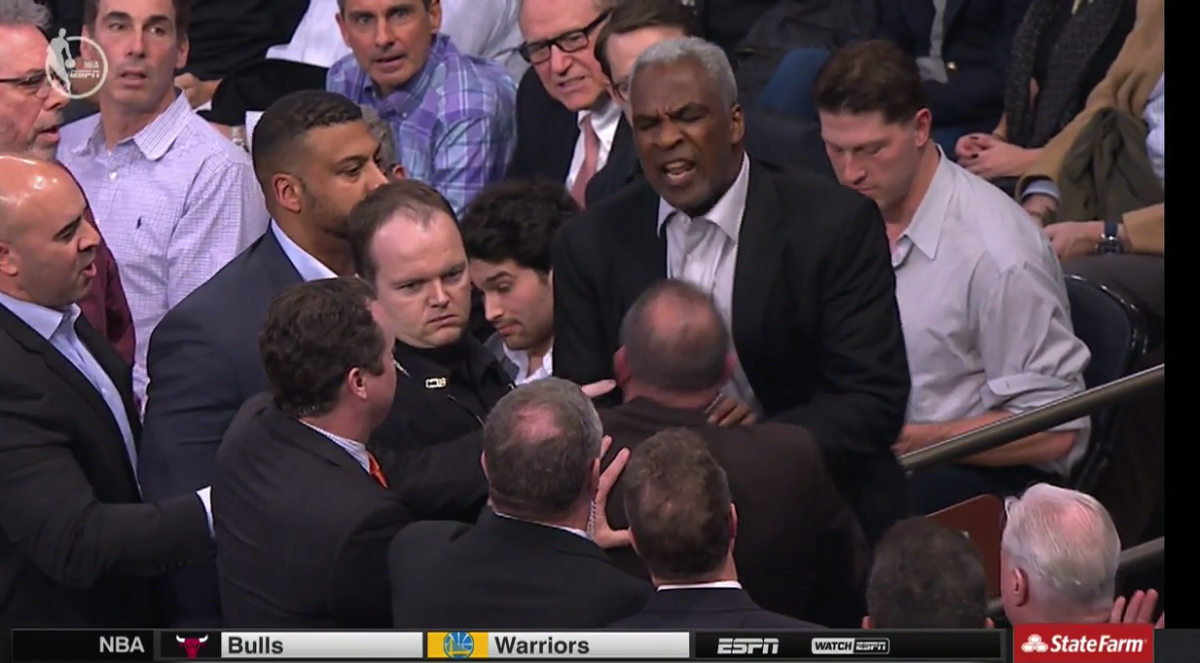 In February 2017 former New York Knicks player Charles Oakley went to a Knicks game at Madison Square Garden.  He sat close to the court, and the game was soon secondary.  MSG’s security asked Oakley to leave and when he did not immediately do so, he was suddenly on the floor, twice, handcuffed, taken out, and arrested.  That evening and the next day, the Knicks released certain statements about Oakley that did not cast him in a positive light.  What followed was a criminal conviction of Oakley, and Oakley’s civil lawsuit against Knicks owner James Dolan, Madison Square Garden and related entities.  The case was assigned to Judge Richard Sullivan.  He was subsequently elevated to the Second Circuit in but kept the case

These pages previously discussed the incident and the District Court’s grant of a motion to dismiss the entire case (“Sports Litigation Alert, “Charles Oakley & the New York Knicks: Classic Don’t Invite ‘Ems” (4-10-20)).   Oakley appealed and the appeal was argued to the Second Circuit on September 25, 2020.  The Circuit recently issued two rulings (Charles Oakley v. James Dolan In His Individual Capacity, In His Professional Capacity, MSG Networks, Inc., Madison Square Garden Company, MSG Sports & Entertainment, LLC, U.S. Court of Appeals, Second Circuit, Docket No. 20-642 (“Oakley”) (11-16-20)).   This article will not repeat the prior article’s lengthy facts but will only focus on those relied on by the Second Circuit in the two decisions.

This opinion only dealt with the causes of action for assault and battery, specifically, “the allegations of unreasonable force applied by security personnel endeavoring to remove a spectator from a sports arena” (Oakley I at 2).  Oakley claimed that Dolan “constantly disrespected” him and had “security harass him” (Id. at 4).  He alleged that within minutes of taking his seat, “Dolan directed security ‘to forcibly remove’ Oakley from his seat” and that he was ordered to leave “without explanation.”  Oakley asserted that he “peaceably returned to his seat” and “merely sought an explanation for why he was being treated differently than every other fan who had attended” the game (Id. at 4/5).  He was then shoved to the ground.  He “got back to his feet” and “the security guards further escalated the confrontation by physically grabbing Mr. Oakley to forcibly compel him to leave.”  Oakley “pushed their hands away in self-defense” but within “seconds” he “was forcibly turned around so his back faced security, grabbed by six officers and thrown to the ground.”  They denied his requests to stand up but put him “into restraints and the security guards roughly threw him out of the Garden” (Id. at 5).   Oakley further alleged that the defendants “greatly exceeded the amount of force that was necessary in the situation” (Id. at 5/6).

His assault allegations included assertions that the defendants “intentionally” placed Oakley in “imminent fear of harmful and/or offensive conduct” and that the tortious conduct caused him to suffer harm and the harm “continues” (Id. at 6).  Oakley made similar assertions in his battery claim.

To “defeat a motion to dismiss” the “plaintiff must allege ‘enough facts to state a claim [for] relief that is plausible on its face’” and “a court must accept as true all factual allegations in the complaint and draw all reasonable inferences in favor of the plaintiff” (Id. at 7).  A property owner “has the right to use reasonable force to eject a trespasser from its premises” but the use of “unnecessary force or evidence of intent to injure…removes the privilege.”  The Circuit stated that Judge Sullivan “understood Oakley’s claim to be that ‘the guards’ use of force was unreasonable because he did ‘nothing wrong and simply wanted to watch the game in peace’” (Id. at 8).  The District Court determined that “nowhere does Oakley allege that the guards intended to injure him” nor did the amended complaint include an “allegation that the force used by Garden officials was unreasonable” nor that it “was excessive” (Id. at 9).

The Circuit reviewed the dismissal de novo “to determine whether the amended complaint” alleged “enough facts to state a claim” that was “plausible on its face.”  The Court spent over a page citing the alleged facts alleged, including the allegations that the security guards “grabbed him,” “pushed him to the ground,” and “forcibly shov[ed] [him] to the ground” (Id.).  The Court quoted further allegations, including the claim that the actions “greatly exceeded the amount of force that was necessary” and that it “clearly exceeded the bounds of reasonable behavior” (Id. at 10.)

The Court noted that the District Court “appears to have somewhat misunderstood Oakley’s allegations, deeming him to argue ‘that any use of force was unreasonable, because it was unreasonable to ask him to leave in the first place’” (Id. at 10/11).  Although “Oakley did contend (incorrectly) that the act of removal was unnecessary, his additional, and actionable, claim was that the security guards used excessive force in accomplishing the removal” (Id. at 11).

The Court distinguished a case cited by the District Court that “is significantly different from Oakley’s case.”  That decision was from a motion for summary judgement, and it dealt with an arrest.  Here the security guards “were not trying to handcuff a person whom they had authority to arrest; his arrest occurred later, outside the arena.”  In these situations, “the question of whether the use of force was reasonable under the circumstances is generally best left for the jury to decide” (Id. at 12), (citation omitted).  This is also true “in the arrest context” where “the reasonableness of the force used is often a jury question” (Id.), (citation omitted).  “These principles apply with even greater force at the motion to dismiss stage, where a court must assume the truth of the plaintiff’s allegations and avoid resolving factual disputes.”  Therefore, “the judgment is reversed as to the causes of action for assault and battery” and “the case is remanded for further proceedings” (Id.).

The Circuit released a second decision that has the same case name, number, and date.  This shorter opinion is labeled “Summary Order” and the front-page states that summary orders “do not have precedential effect” but may be cited (Oakley II at 1).  Prior to dealing with the merits, the Court stated that the District Court dismissed a claim for abuse of process, but Oakley did not challenge that on appeal (Id., FN 2).  The Court also noted that Oakley had appealed the District Court’s denial of leave to further amend his pleadings.  This was denied because the Court held that the assault and battery claims were adequately pled and the Court affirmed “the dismissal of most claims in this Order” (Id., FN 3).  The Circuit then turned to the appeal of the other dismissed claims.

The Court reviewed the dismissal de novo, and it had to “assume the truth of all of the allegations and draw all reasonable inferences from those allegations in the plaintiff’s favor” (Id at 2/3), (citation omitted).  Oakley’s claim for defamation was for “falsely accusing him of being an alcoholic” and “of having committed the serious crime of assault against members of the public” in various tweets and an interview given by Dolan.  Oakley pled a claim of slander against all of the defendants for injurious spoken words and for libel against MSG (Id. at 4).

Oakley is a public figure, and thus had to plausibly allege that the defendants acted with “actual malice.”  The Circuit agreed with the District Court that “the amended complaint lacks sufficient allegations from which to infer that Defendants know or recklessly disregarded that their statements about Oakley’s drinking were false.”  Those statements included Dolan’s comments that “witnesses at the Garden claimed Oakley had appeared to be impaired; that Oakley said on television that he had been drinking before the incident; and that Dolan questioned on ESPN whether Oakley might ‘have a problem,’ and ‘we don’t know, right.’”  The Knicks also tweeted that Oakley “might need ‘help.’”  The “critical question is the state of mind of those responsible for the publication’” (emphasis in the original).  However, the “amended complaint contains insufficient allegations that Defendants knew or recklessly disregarded that they were false, as is necessary to establish actual malice” (Id.).

The same fate met Oakley’s “false accusations of assault” (Id. at 5).  Those allegations did not “adequately plead that these statements are per se actionable or resulted in special damages.”  Only four types of claims are “per se actionable under New York law.” Those are imputing unchastity to a woman, asserting that the plaintiff has a “loathsome disease” (neither are present here), statements that injure him in his profession or charge the plaintiff with a serious crime.

The amended complaint did “not identify what Oakley’s cognizable trade is.”  The “complained-of charges of abusive behavior bear only on his general character and not on his ability to perform his job.”  Furthermore, the defendants did not state that Oakley had “committed a serious crime” nor did the statements “support an inference that Oakley’s actions amounted to a criminal assault.” Some of the statements referenced his arrest, but “they also suggest that the only consequence for the incident should be a focus on Oakley’s well-being, not any legal consequences that usually attend a serious crime.”

In the “absence of per se actionability, Oakley must instead plead that the statements result in special damages, or ‘actual losses’ that were specifically and ‘casually related to the alleged tortious act’” (Id. at 6).  The amended complaint did not do so, but instead the statements as pled “were tied to Oakley’s theory” about “false accusations” regarding “his alcoholism, not about his alleged commission of assault.”  Thus, the defamation “allegations fail to state a claim under New York law” and the Circuit affirmed the dismissal of those claims.

The District Court dismissed Oakley’s claims that the defendants violated both the ADA and the New York state law equivalent “’by denying him access to the Garden based on their perception that he suffers from alcoholism,’ a protected disability.”  However, Oakley failed “to plead plausibly that the Defendants acted against Oakley as a result of his perceived alcoholism, as opposed to his alleged inebriation at that time and the resulting disruption” (Id.) (emphasis in the original).  The amended complaint “at most” speculated “after the fact that Oakley had a problem with alcohol.”  To the staff, “Oakley appeared ‘impaired’ because he had been drinking” prior to the incident, but there were no allegations that “Defendants believed, let alone discriminated against him because they believed, that Oakley was an alcoholic” (Id. at 7).

The Claim for False Imprisonment

Oakley sought “reinstatement” of this claim but “only to the extent that the public accommodation claim is reinstated.”  For ‘the public accommodation claim to be viable” he “must allege” that the defendants’ “confinement of him was not ‘privileged.’”  Oakley’s “theory” is that the guards’ “detention was not privileged when Defendants acted for unlawful discriminatory reasons, (that is, on the basis of his alcoholism) in violation of the ADA and NYSHRL.  Because we affirm the dismissal of those claims” the Court affirmed the dismissal of the false imprisonment claim.

This was a great result for Oakley.  The opinion dealing with the assault and battery claims cited a case that stated that “the reasonableness of the force used is often a jury question” and thus summary judgment may not be forthcoming.

During the motion to dismiss, videos of the incident were submitted by the MSG defendants.  The District Court did not consider the videos then, (Oakley I at 7, FN 3), but they may be admitted on a motion for summary judgment.  Those videos could change everything but at this distance it is impossible to know what the impact might be.  However, the videos could lead to some extremely difficult deposition questions for the parties.  Irrespective of right and wrong, Dolan, MSG and their insurance companies are going to soon have some interesting conversations regarding the best way to proceed.

Read more articles from this Issue